The printing mechanism HP Laser Jet Pro 400 MFP M 425 dn and HP Laser Jet Pro 400 M 401 a works with the HP cartridges CF 280A and HP CF 280X. Insert the HP toner cartridge (Figure 1) to himself. Using a soldering iron, melt an approx. 8mm filling hole in the CF 280A or HP CF 280X cartridge at the red marked point. The filling hole should never be drilled. When drilling, chips are produced which damage the cartridge.

Before you can refill the new toner, you must thoroughly remove the remaining old toner in the cartridge. The old toner can only mix poorly with the new toner due to its changed physical properties due to friction, movement and temperature fluctuations. As a consequence, this will mean poor printouts. Fill the refill toner into the drilled toner filling hole using a funnel. Seal the filling hole with a piece of fabric tape.

The CF 280A or HP CF 280X cartridge. is now filled. Then the chip in the cartridge has to be changed. To do this, cut off the two front plastic corners of the chip holder with a craft knife and carefully pull the chip out (Figure 2 and Figure 3). The new chip is inserted into the cartridge in the same position as the old one and, if necessary, fixed with a small piece of double-sided adhesive tape. 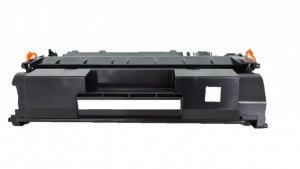 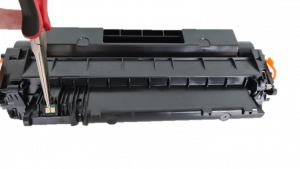 Safety note for handling refill toner:
Refill toner and toner powder can be harmful to health if improperly handled. We expressly recommend the use of respiratory protection equipment or suction chambers when filling toner cartridges. In addition, toner powder and refill toner can be extremely flammable with an appropriate oxygen mixture. Also, be careful not to touch the photoconductor drum or expose it to direct sunlight. This can lead to incorrect printouts.
Eurotone assumes no responsibility for the success or failure of the procedure described.

We use cookies. Many are necessary to operate the website and its functions, others are for statistical or marketing purposes. With the decision "Only accept essential cookies" we will respect your privacy and will not set cookies that are not necessary for the operation of the site.

Marketing cookies are used by third parties or publishers to display personalized advertising. They do this by tracking visitors across websites.